What is Epidermal Cyst?

An epidermal cyst, also known as an epidermoid cyst, sebaceous cyst, inclusion cyst or keratin cyst , is a small, painless, benign, slow-growing bump under the skin. Characterized by a sac filled with a greyish-white, foul-smelling, cheesy-like substance called keratin, they are usually found on the face, scalp, behind the ears, neck, upper back, chest or genitals. Epidermal cysts are usually caused by the blockage of a hair follicle by acne or injury to the skin, or blockage of a sebaceous gland, which excretes an oily substance to lubricate the skin and hair. They occur more commonly in males rather than females, and more often in young to middle aged adults. Some people with rare syndromes may also experience numerous epidermal cysts are one of the symptoms. However, these epidermal cysts are almost always non-cancerous and rarely cause problems or require treatment.

What are the signs and symptoms?

An epidermal cyst appears as a small lump under the skin. It can sometimes excrete a foul-smelling, cheesy-like material from inside the sac of the cyst. When infected, it can also be red, inflamed and painful. Occasionally, a little horn may develop over the cyst. If you are experiencing these symptoms, check with your family doctor that it is a benign epidermal cyst. 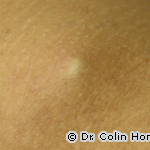 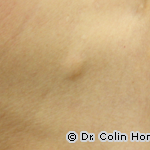 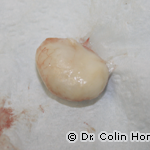 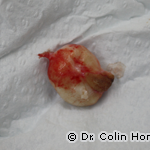 What kind of tests can I undergo?

A doctor can usually identify an epidermal cyst just by visual inspection. A physical exam may be needed, or a referral to a dermatologist. Surgical excision of the entire lesion may help to confirm the diagnosis and to eliminate any fears of malignancy.

Usually, no immediate treatment is necessary for epidermal cysts. If it is not malignant, it would not be harmful to one’s health to leave it as it is. However, many people with epidermal cysts do tend to seek treatment, especially since the lesion is always continually growing. This is usually for cosmetic reasons, if the cyst is in an irritating location (like in the scalp while combing hair), or if it has become infected. There are a number of possible options for different kinds of treatments. A steroid injection may reduce the inflammation of the cyst, but it does not remove it. Surgical drainage consists of cutting open the cyst, draining the pus inside and then removing the cyst wall, but this can leave some part of the cyst behind, allowing it to recur. Antibiotics can be prescribed if the cyst is infected, but again this does not get rid of the cyst itself. The only definitive method of treatment for epidermal cysts is surgical excision. This is the method that Dr. Hong prefers to perform, whereby the entire cyst, including the cyst wall and its contents, are removed intact. This method has the lowest probability of leaving any of the cyst behind, reducing the chances of the cyst growing back.

What can I expect from surgery?

The surgical procedure to remove an epidermal cyst is quite easy. The surgery itself would typically take approximately 15 minutes. Local freezing would be used, and about 20-30 minutes would be added to the surgery time to allow for the freezing to set in. However, because of the local freezing, the patient would be fit to drive home afterwards. Once the specimen has been excised, it will be sent to a lab to be tested for any malignancy and to confirm the diagnosis. Stitches will be needed, and will typically be removed 5-14 days later, depending on the size and location of surgery. Redness is normal even after the stitches have been taken out, but after 4-6 months the scar should be hardly visible. There should be minimal to no pain after the local freezing has worn off, but Tylenol Extra Strength can be taken if there is.

What are the risks?

The risks of excising an epidermal cyst are very rare but can include infection, suture reactions, bleeding, bruising, and scarring. Please speak to your doctor about any medications you are taking and if you have had abnormal scarring (keloids or hypertrophic scars) in the past.

How much will it cost?

Unfortunately, the surgery to remove an epidermal cyst is not covered by OHIP. A consultation with Dr. Hong is recommended to find out the exact price for your procedure. Without a referral from your family doctor, an $80 consultation fee will be required, but it will be applied towards the cost of the surgery. There is no additional fee for follow up appointments such as the removal of sutures.

“Read real stories of some of Dr. Hong’s patients and their experience after having undergone cosmetic enhancement”