Toronto Pyogenic Granuloma RemovalWhat is Pyogenic Granuloma?A pyogenic granuloma, also known as bleeding hemangioma, granulation hemangioma, lobular capillary hemangioma, pregnancy tumor and tumor of pregnancy. It is a small, raised, reddish or yellowish lesion. The red colour is attributed to the high number of blood vessels within the lesion, which can cause the papule to bleed. Also known as a lobular capillary hemangioma, it is commonly found on the hands, fingers, arms, face and neck. It mostly affects children and young adults, although they are also found in pregnant women, in which case they are found inside the mouth. They are characterized by rapid growth at the beginning of their appearance which lasts a few weeks. After that, they do not increase much in size. Although these lesions are benign, their symptoms can be similar to those of more malignant conditions, so it is important to see your doctor.What are the signs and symptoms?A pyogenic granuloma is typically small (less than 2cm), raised and red in colour. Its surface can be smooth, but due to bleeding caused by the high concentration of blood vessels, the surface can also be crusty. At initial onset, it can have a rapid growth for a few weeks, after which the growth is slowed or stopped. Most pyogenic granulomas seem to occur in areas where the skin has experienced trauma from things such as bug bites or thorn pricks. 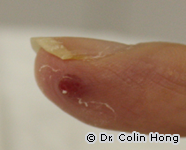 What kind of tests can I undergo?

Your doctor can usually identify a pyogenic granuloma based on visual examination. A biopsy, where a portion of the skin is excised and sent to a lab for testing, can also help to confirm the diagnosis. Because its symptoms can also be similar to more malignant tumors, a biopsy is helpful in ruling this out.

What are the treatment options?

Usually, no immediate treatment is necessary for pyogenic granulomas. However, many people with pyogenic granulomas do tend to seek treatment, especially since the lesion can often bleed and look unsightly. This is usually for cosmetic reasons. Smaller lesions can go away on their own, but some larger lesions will require intervention. Although they can be treated with laser, silver nitrate (to stop the bleeding), cauterization (burning the lesion to kill the blood vessels) or by freezing it, surgical excision has the best results and the lowest chance of the lesion recurring. If the lesion is not completely removed, the remainder of it can spread to other blood vessels in the same area. Surgical excision also allows the lesion to be sent for pathology to confirm the diagnosis, whereas laser, silver nitrate and freezing do not.

What can I expect from surgery?

The surgical procedure to remove a pyogenic granuloma is quite easy. The surgery itself would typically take approximately 15 minutes. Local freezing would be used, and about 20-30 minutes would be added to the surgery time to allow for the freezing to set in. However, because of the local freezing, the patient would be fit to drive home afterwards. Once the specimen has been excised, it will be sent to a lab to be tested for any malignancy and to confirm the diagnosis. Stitches will be needed, and will typically be removed 5-14 days later, depending on the size and location of surgery. Redness is normal even after the stitches have been taken out, but after 4-6 months the scar should be hardly visible. There should be minimal to no pain after the local freezing has worn off, but Tylenol Extra Strength can be taken if there is.

What are the risks?

The risks of excising a pyogenic granuloma are very rare but can include infection, suture reactions, bleeding, bruising, and scarring. Please speak to your doctor about any medications you are taking and if you have had abnormal scarring (keloids or hypertrophic scars) in the past.

How much will it cost?

Unfortunately, the surgery to remove a pyogenic granuloma is not covered by OHIP. A consultation with Dr. Hong is recommended to find out the exact price for your procedure. Without a referral from your family doctor, an $80 consultation fee will be required, but it will be applied towards the cost of the surgery. There is no additional fee for follow up appointments such as the removal of sutures.

“Read real stories of some of Dr. Hong’s patients and their experience after having undergone cosmetic enhancement”